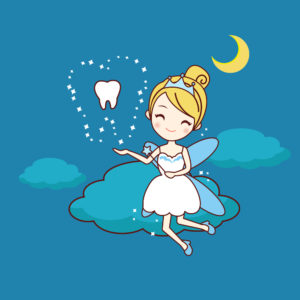 When compared to other magical visitors like Santa Claus or the Easter Bunny, the Tooth Fairy’s history is more elusive. Unlike most traditions that can be traced back hundreds of years, historians have had a hard time pinning her down.

February 28 is National Tooth Fairy Day, and Highlands Ranch Dental Group is paying her homage with this summary of her origin.

Several counties have old traditions that may point to the modern Tooth Fairy.

The Tooth Fairy Makes her Debut as a Mouse

In an 18th century French play, “The Good Little Mouse,” our fairy makes an appearance as the protagonist. In the play, a bad king imprisons a good queen. When a mouse appears to the queen, she transforms into a fairy and later forces the king’s teeth from his mouth, hiding them under a pillow. Then, the king is killed.

This play was translated to English and released in book form in the 1920’s. In 1949, Collier’s magazine ran a story about the Tooth Fairy, and by 1979, she had her first reference citation in The World Book Encyclopedia.

During the 1950’s, our heroine’s career is in full swing. After WWII, American families were more prosperous and adopted a child-centric view of their home lives. Tinkerbell from Peter Pan and the Fairy Godmother from Cinderella were introduced and wildly popular.

Her Prices are Fair

The Tooth Fairy is gracious enough to keep up with inflation. Prior to 1975, children were paid about 12-18 cents per tooth. Today, the average price of a baby tooth is $3.70.